Brooklyn, in the heart of New York coolness

Just like the Brick Lane neighborhood in London, Brooklyn is known for being the coolest New York City neighborhood where artists and hipsters meet up. We really had a crush on this neighborhood and its relaxed lifestyle and we spent two pretty nice days there!! Last week we told you a bit about Coney Island which is located at the South of Brooklyn. This time, we suggest you totally embrace the unique atmosphere the place has to offer through cool activities, obvisouly!

We had decided to get to Brooklyn by walking through the Brooklyn Bridge and so it all began at the City Hall subway station, at the South of Manhattan. After spending several minutes scratching our heads trying to find our way, ultimately a charming New Yorker saved us! We were the first surprised to see her spontaneously offer her help, those New Yorkers really are welcoming! It’s a very special feeling to cross a bridge you saw dozens of times on TV or big screen before, we appreciated each moment of it and took dozens of pictures and videos from many angles! As it can be expected, the place is pretty busy and we were surprised to witness many padlocks hung on its plates by lovers from all around the world.

Once in Brooklyn, the contrast with Manhattan is striking. The huge skyscrapers and urban craziness are replaced by a more quiet residential area where many families are settled. We discovered this new environment by strolling through the beautiful Brooklyn Heights neighborhood, where many red brick buildings line avenues dotted with greenery. For the record, the photo of Nath sitting on the steps of a house was taken in 3 seconds tops! We asked a local resident and you have to know that these stairs are considered as part of the house. So we would normally need permission from the owner to sit there. So Seb had to set up the camera first and then Nath rushed to sit on the steps of this beautiful porch and stayed for only a few seconds, enough to take several photos and then boom, it was finished! We then gently headed west to the Brooklyn Heights Promenade, where many benchs are facing the East River and especially Manhattan. The place offers great views of the skyline and is truly a haven of rest! We sat for a few minutes to observe the locals and a lovely family soon catched our attention. The parents seemed to come straight out of a fashion magazine and the father, a tall blond guy looking half-Californian half-Scandinavian, was joyfully being interviewed by two girls who seemed to shoot a TV reportage. Meanwhile, his son was speeding on the aisles of the Promenade driving his miniature racing car and his mother easily discussed with us for a few minutes and willingly explained to us how to get to Brooklyn Bridge Park.

Kayaking with a view

We headed straight to the pier number 2 to experience a pretty odd activity to say the least: free kayaking on the East River, facing Manhattan! On that day, the weather was particularly cold and dreary so we weren’t pretty happy with the idea of wading in the water but it was also a special experience that we wouldn’t get to try again anytime soon! So we forgot about our reticences and got on our kayaks after completing some formalities. Good point : the place was empty! It is recommended on their website to come early to avoid waiting your turn for several hours but we got the luxury not to wait and we didn’t have to care about the time. Usually, the ride must not exceed 20 minutes in order to keep a constant flow of people. We would be lying if we said that this was the perfect treat. It was cold, it was raining and we were completely soaked when we got out of there but the view of Manhattan from the water is absolutely stunning, we absolutely don’t regret doing it!

Let’s now head over to Greenpoint, another Brooklyn neighborhood up north that is full of superb works of street art. We are now Sunday morning and we stumbled upon stunning art works while going to brunch at a trendy local restaurant. Besides Harlem, we didn’t see that much street art pieces in Manhattan (perhaps we just missed them!) and so it is with amazement that we took the time to admire, study and photograph these beautiful pieces that give great charm to the neighborhood.

Visiting is fun and all but what about eating?! As devoted foodies, we had already picked out some nice places! Therefore, we will first suggest you to go to Smorgasburg, a huge open-air food market held every weekends in Brooklyn. This is simply the most pleasant torture of all to walk down the aisles of the market and be attracted by delicious smells of grilled meat, sellers who put up a show and the omnipresent music. The urge to taste everything was naturally present as the cuisine is varied and cosmopolitan. It took several minutes of exploration, comparison and negotiations (because on top of it all, we didn’t agree with each other!) to finally get to taste several dishes that were absolutely delicious! We tasted the very spicy chicken wings from Dan and John’s Wings and the delicious grilled smoked meat from Carnal served as a mini burger. We even had to split up in hope of tasting the crispy homemade fries with a cheesy sauce from Home Frite and the delicious ramen burgers from Ramen Burger which each had a good 45-minutes waiting line in front of their booths, and now we know why!

And after admiring the street art pieces in Greenpoint, we had a delicious brunch at Five Leaves following the advice of our dear friend Marie from the blog Plus Belle New York. Again, it takes a good half-hour wait before getting a table and you can’t make a reservation! So we waited patiently, sitting on one of the benches near the restaurant and, again, the wait was more than justified! Following the good advice of our waitress, Nath had a Moroccan scramble and Seb tried the Big breakkie (do not hesitate to roll your mouse over the names of our dishes to know what they were made of) along with 2 large hot drinks. We recommend you this place without any hesitation! If you ant more infos about the best places to eat in New York City, check our foodie blog post!

To have a drink

We’ll end the day by taking you to the Bedford-Stuyvesant neighborhood, where a totally unforgettable and unique experience awaits us. We had an appointment with Debbie who throws weekly private jazz concerts at her place where she invites her musician friends but also a few locals in a welcoming and very friendly atmosphere. But we’ll tell you more about it later. Since we were early, Debbie told us about a cozy bar that was just around the corner, Eugene & Co where we sipped delicious cocktails in a cool relaxed hipster atmosphere, while waiting to go back there.

If you want more infos to properly set up your New York City trip, check our New York handy guide! 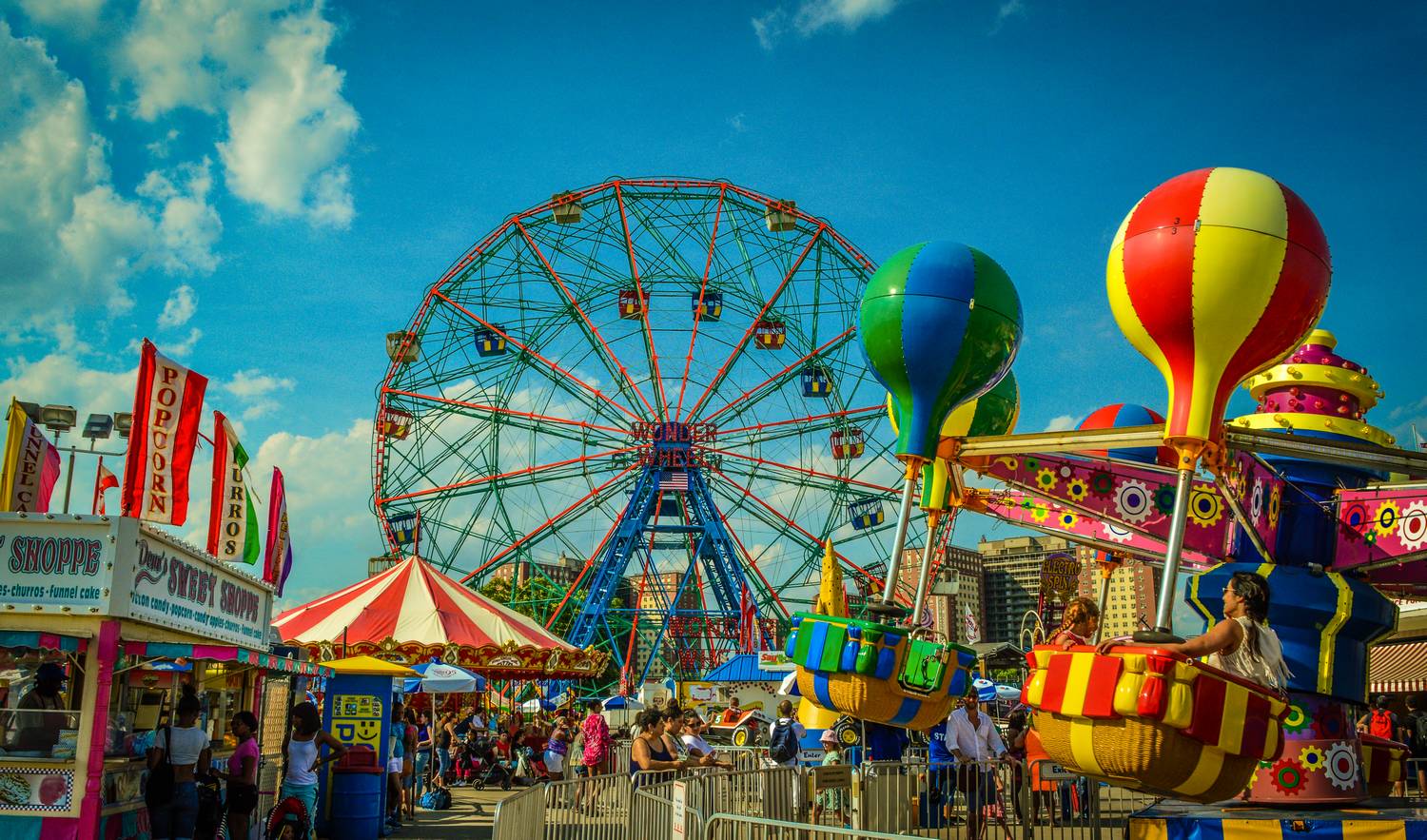 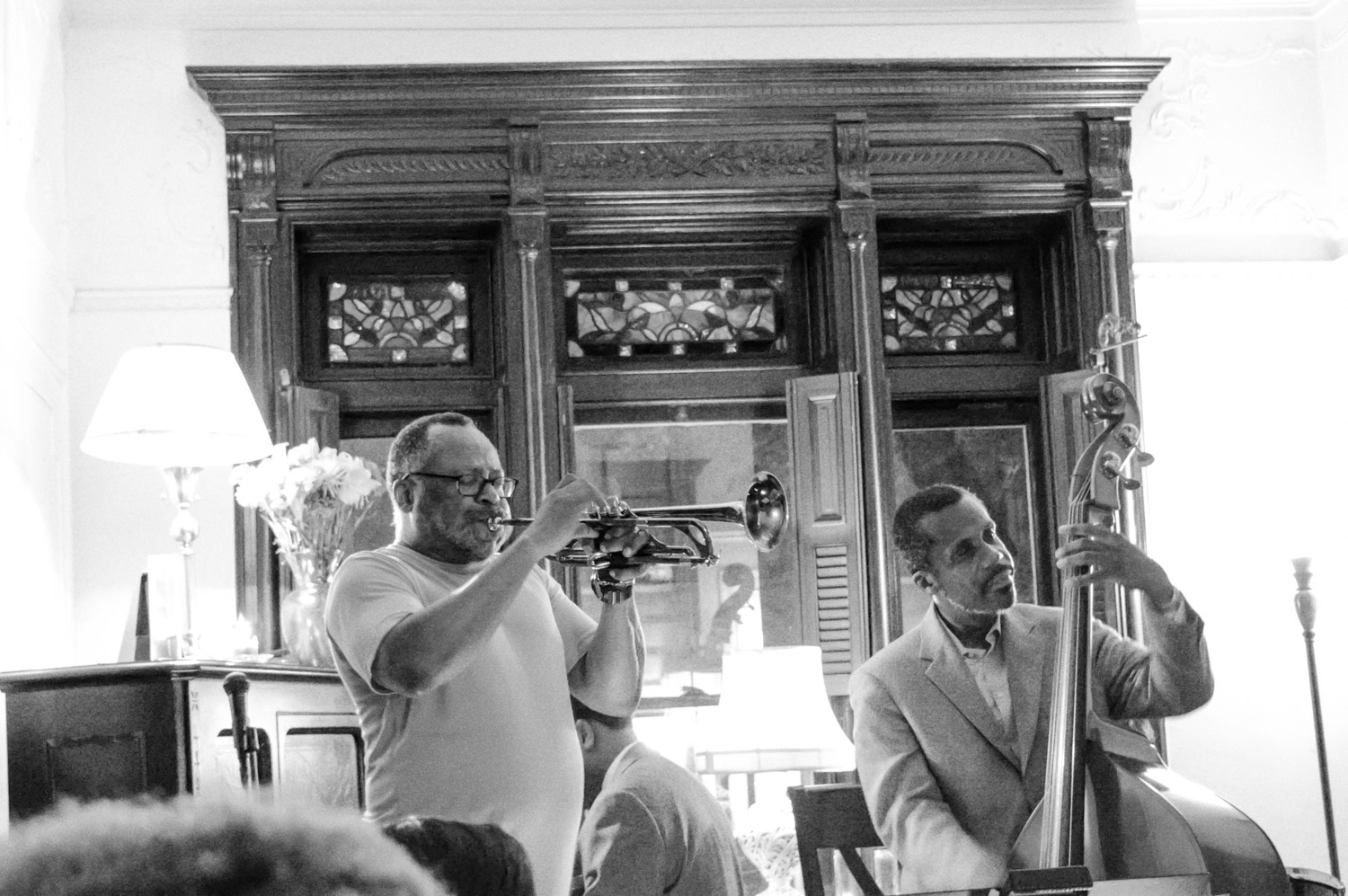